The Horton and Wraysbury Neighbourhood Plan  was formally made part of the Local Development Plan by the Royal Borough of Windsor & Maidenhead on Tuesday 23 June 2020.
The Neighbourhood Plan passed a community Referendum vote with an 83% majority on January 31, 2020.
The Neighbourhood Plan has been prepared by the Steering Group made up of parish councillors and members of the community.
The Plan establishes a vision for the future of the area and sets out how that vision will be realised through planning and controlling land use and development change over the plan period 2018 to 2033.

This is now effeectively a static web site and wil be archived shortly.  The online portions of the Wraysbury Archive are accessible through the Wraysbury Parish Council Web Site.

The Results of the Referendum are as below.

Number on the Electoral Role: 4151

The accepted version of the neighbourhood plan, along with other pertinent documents can be found at:-

A Summary of the NP 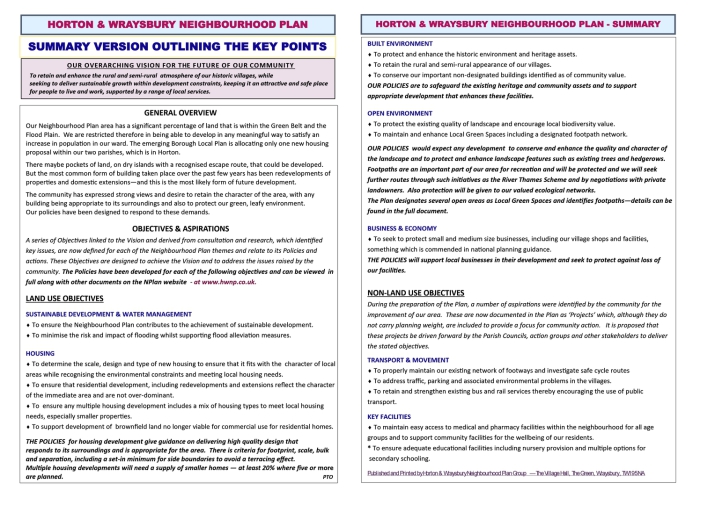 Or you can download a pdf using the below link

The Steering Group started work on the Neighbourhood Plan back in 2013 – so it’s been long road to reach this stage, with hard work from a dedicated team which included preparation, consulting the community and overcoming drawn out procedural difficulties.   The Group can only hope that the community appreciates that this plan does afford them a voice.

At the meeting of the RBWM Cabinet on Thursday, October 31, 2019, it was resolved unanimously for the modified neighbourhood plan to go to referendum and the Head of Planning has issued a Decision Statement.
This was the latest procedure following the H&W NPlan’s Submitted Version being delivered to the royal borough who then ran a Regulation 16 Consultation from February 4 to March 20, 2019.
The NPlan was then examined by an independent Examiner who made a series of modifications so that it met the legal requirements and the Basic Conditions as set out in the Town & Country Planning Act 1990. These modifications were accepted by the Qualifying Body (Horton and Wraysbury Parish Councils) and finally agreed by Cabinet.
The Referendum vote will have a ‘yes or no’ option on the question:  “Do you want the Royal Borough of Windsor and Maidenhead to use the Neighbourhood Plan for Horton & Wraysbury to help it decide planning applications in the neighbourhood area?”
If adopted, our neighbourhood plan will form part of the borough’s decision making process on planning applications.

What is a Neighbourhood plan?

A Neighbourhood Plan is a way of helping local communities to influence the future planning of the area in which they live and work. The Plan must be an evidence-based assessment of the social, economic and environmental needs of a community. This Plan will give the local community an opportunity to have a greater say in the planning and development of the village over the next ten to fifteen years. Once adopted the Plan will have legal weight and will be used when making planning decisions in the Parish.

A Neighbourhood Plan allows us all to:-

Open Day
Although overtaken by events, as you would expect, the slides for the open day are still available for your perusal by following the link below. 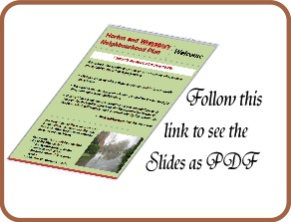