HOW THE PLAN WAS CONSTRUCTED

2013
The community engagement process began in April, 2013, with two initial consultation events – one in Wraysbury Village Hall, the other in Champney Hall, Horton.  At these publicised events residents listed their concerns and ideas on various topics.
Both events were well supported by residents. During the remainder of 2013, the Steering Group held meetings to assimilate the feedback and the issues gained from the initial consultations and to formulate ideas and objectives aimed at addressing villagers’ aspirations.

The Steering Group then concentrated on establishing a Vision for the area, and nominated Topic Group leaders to work on Housing & Built Environment, Community, Environment, Transport & Travel and Business.
The Topic Groups continued to gather information including contacting local groups, and our Neighbourhood Plan website was set up to keep residents informed of progress.  The Parish Council websites were also used on progress updates.

2014
The Steering Group continued to formulate issues and objectives from residents’ concerns, and a questionnaire survey was constructed to get the views of the community on the initial aims.
This was run from September 1 to November 7, 2014, online via the Borough Council’s Survey Monkey system so data could easily be assessed.  Paper copies were made available to those without computer access and special meetings with the Age Concern groups were held, along with assistance at the village Container Library for young and old.
Publicity for the questionnaire was extensive, with a glossy leaflet drop to all addresses in our neighbourhood, plus an article and advert in the local magazine, which has 2,500 copies distributed to all households and drop points in both villages, and also using the villages’ Facebook page, and the Neighbourhood Plan and Parish Councils’ websites.  Posters were on display in the villages.
Open Days were held during September to promote the questionnaire in both villages, which received good community response, plus a stand at the popular St. Andrew’s Church Garden Party event.

2015
The Steering Group worked on analysing the responses and comments from the Questionnaire during the early part of 2015 and from those, formed Objectives on the various Topics – Housing, Environment, Community, Transport/Travel, and Business/Economy.
We have had an area Character Assessment carried out by planners organised by Planning Aid England.  This has been added to with our local knowledge to make it more comprehensive.

2016
It was recognised that more direct engagement with the community was needed to explain the background to the process and the constraints to development regarding flood zones and Green Belt in our area, and to seek views of parishioners on the proposed policy ideas.
An Open Day was in held in April, 2016, in Wraysbury Village Hall, for feedback on the proposals and this was combined with an online survey until the beginning of May. Promotion for this was through a neighbourhood wide mailshot, posters, plus Facebook and local paper publicity with over 200 responses being received.

Face to face conversations also took place with local businesses to inform them of the Plan and assess their needs and concerns. Throughout the process, the Steering Group has regularly consulted with both parish councils.

After analysing the evidence gathered from the various surveys, the Steering Group finalised the Draft Horton and Wraysbury Neighbourhood Plan in September, 2016. The Regulation 14 Pre-Submission Consultation on the document was launched at St Andrew’s Church Garden Party in Wraysbury on September 3rd.  This was followed by a public Drop-in event on October 10 (4pm – 8pm) in Wraysbury village hall.

The Consultation ran for an eight-week period from September 3rd until October 31st.
A co-ordinated publicity campaign was undertaken which included distributing a four-page A5 leaflet to all addresses in Horton and Wraysbury, detailing where the full draft plan could be viewed and comments could be made. The leaflet also contained a non-technical brief version of the Plan which set out the most important points – and publicised the open day events.  The consultation was covered in the local press, and notifications were sent to statutory and non-statutory consultees.

2017
The responses to the consultation were analysed and the Plan was amended as appropriate.  Work on this was completed in the February and a request to RBWM was made for an opinion on whether a Strategic Environmental Assessment was needed.   The Steering Group reasoned that this extensive process was not and a Draft Submitted Version of the Plan was presented to both parish councils, who ratified it in March/April.

2018
With no response a year after the request for screening opinion, the Steering Group decided to go to the Housing Minister to intervene, in April.   This quickly brought a response from RBWM and we finally received the screening opinion – which disappointingly said that our Plan did require an SEA.
May/June -   Our professional consultant was shocked with this result and sought further advice about having an independent second opinion.
The Parish Councils, having sought advice from officials in the MHCLG, agreed to seek a second opinion on the issue and decided to appoint Lepus Consulting who are the Royal Borough’s consultants on the new Local Plan.
August/Sept -  After Lepus’ recommendations and clearance from the three statutory consultees the outcome was that the H&WNP was ‘screened out’ under both sets of regulations.
But further deliberations by RBWM meant there was still no decision.

2019
Finally, in January, RBWM signed the document clearing the way for our Plan to be submitted, which was then officially sent to them on January 21.
The borough then ran a six-week public consultation on the plan which ended March 20.
An independent examiner then had to be appointed and agreed by the borough and the qualifying body.  The appointed examiner started work at the end of April.
Over the next months, clarifications on the plan’s policies were asked for the examiner and responses given by the Steering Group.  The examiner’s modifications had to be approved by both parish councils before the NPlan could be sent to RBWM Cabinet.
On recommendation by the examiner that the plan could go to referendum as modified, Cabinet agreed at its October meeting.

2020
At the end of January, residents in the plan area were able to cast their votes in a Referendum, and it passed with an 83% majority.
The last stage was that the full council of the borough on June 23 formally accepted it as to be part of the Local Development Plan, and the policies in the Horton and Wraysbury Neighbourhood Plan will be used when planning decisions are made.

Steering Group meeting notes are available through the links below. 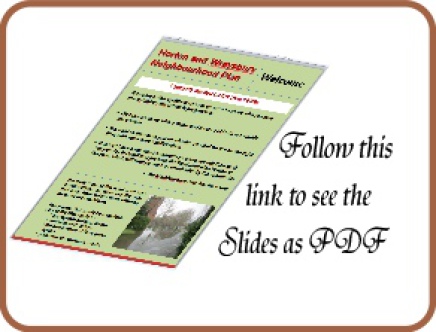